Well this Bank Holiday weekend was spent down in Pembrokeshire with my Mum. Old films were watched, a zoo was visited and, hence it's mention on this blog, a boardgame was played.

As previously mentioned Emma, my long suffering fiancée, only likes playing board games that take ten minutes or less to explain and about an hour (or less) to play. However, there are some games she has enjoyed in the past and is willing to give another go. One such game is Arkham Horror. 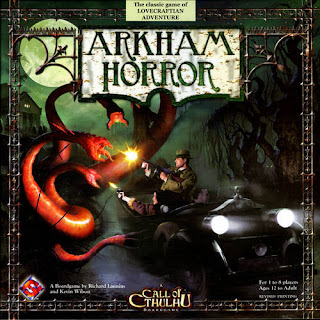 We played it with a bunch of people years ago, I think on that occasion we did manage to kill off the Elder God who was causing mischief. At the very least we managed to get a few shots in. I've played it solitaire many times since, one investigator verses the Dark (and have been devoured almost every single time but have enjoyed every game).

For any not familiar with the game it's a co-operative (or solo) jaunt against the game itself, you move round investigating strange occurrences (collecting clue tokens) which you then use to seal Eldritch gates that keep opening up and spewing forth monsters onto the streets of Arkham. It scales pretty well as it has different victory conditions depending on how many people you play with. The co-operative element works really well. You find yourself planning who will go fight a monster whilst another goes and gets some clue tokens.

Time-wise it can run a bit long by Emma's reckoning, it takes about an hour per person (before you're consumed) or slightly longer of you're doing well. However, it is hugely dependent on luck. Every turn a gate opens, if a gate is already open you get a surge of monsters and a clue is generated. However if a gate opens on a clue it disappears or if there's an open gate on the clues location it does not appear. In our game this happened a lot so quite a few turns were spent running around trying to generate some clue tokens from random encounter draws on locations. After a couple of hours we decided to have a break (which we have yet to continue).

I was thinking about ways to speed up what is an excellent game and I think next time we play I might use a house rule that if a clue cannot be placed it's placed nearby, or perhaps give the clue to a random monster - allowing you to claim it if you kill it. Clues that are 'swallowed' by gate locations I think I'll randomly dump somewhere. If this makes it too easy I'll tweak it. Having said that I haven't yet had a rummage around on Board Game Geek to see if people have any variants for faster/two-player play.

This week I've got a few days real work lined up so gaming opportunities are a bit sparse, especially as I also have two 'secret' projects I'm working on. One is rather big and involves playtesting, writing, painting and web design and the other is equally big and involves editing and layouts. Both are tremendous fun and will be annouced in the coming months.

Ooo, and Orcs in the Webbe v6 is getting there too, four pages now have layouts I am happy with and (drumroll) the new logo nearly there (although the colours may change) :)

Here's a sneak peak of how things are looking...

Posted by MadWelshWizard at 7:31 am

I have designed games, written sequels, reformatted older rules - all for my own eyes, behind closed doors, occasionally just within the confines of my mind. This blog is my attempt to rectify that. Hopefully you'll find something of interest as time passes by...